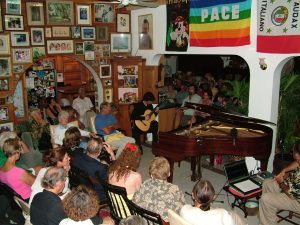 Sit in the cozy comfort of a family living room and listen to renowned classical musicians perform the same works they do when appearing at world-famous venues such as Carnegie Hall in New York City. This ambience and allure is what everyone found at the Water Island Music Festival. This year, concerts took place from 7 p.m. to 10 p.m. on January 13, 14 and 15. Like past years, the location was the home of Alex and Beverly Randall, at Providence Point, Water Island, which overlooks the Caribbean Sea and is a 10-minute ferry ride from Crown Bay Marina, on St. Thomas.

“We didn’t know the program in advance because we had to wait to see who arrived,” says Alex Randall, locally-known as the ‘Good News Guy’ on WSTA (1340 AM) radio, who co- founded the festival 13 years ago with famed pianist, Julian Gargiulo. “But, that’s all part of the fun.”

This one-of-a-kind concert series started serendipitously thirteen years ago. The year prior, Garguilo walked into the WSTA studios to promote a concert he was giving on neighboring St. John. This provided Randall the cue to invite the famed Italian-born, US-bred, internationally-trained pianist to come play on Water Island. Garguilo came back just as fast with a throw down to Randall: ‘Get a piano and I’ll come.’

“At first I thought it was a joke. But Julian was deadly serious. He bugged me every week for the next 11 months. So, at Thanksgiving, I went on EBay and bought a piano (since upgraded to a Yamaha C7 concert-quality instrument). We were just having it delivered the day he arrived. I put up a sign on Water Island, ‘Concert Tonight’, and 75 people showed up in my living room. They’ve kept coming ever since,” tells Randall.

The first time Garguilo played in the inaugural Water Island Music Festival in 2005, his repertoire included note for note the concert he played at Carnegie Hall the week prior. Needless to say, the audience was in rapt delight. So were the Randall’s who answered the piano virtuoso’s request to return the next year, and bring some friends with him, with a resounding ‘yes.’ Fast forward 12 months, and Garguilo was joined by Maria Yefimova, a gifted Russian pianist. The two played classical solos and duets. By now, the offer to return to Water Island was a standing invitation and the pianist brought even more fellow globally-acclaimed classical artists. Just a few of these over the years have included French-born trumpeter, Julie Desbordes; Canadian trumpeter, Joe Burgstaller; the US pianist, Wells Hanley; South Korean violinist, Hae Ji Kim, and Uzbeks opera singer, Ruza Bulat. What the performers play is a mix of classical, pop, jazz, original works performed for the first time before hitting the bigger stages and novelty improvisations. One year, the artists extemporized how classical composers like Beethoven, Chopin or Debussy might play contemporary songs like Eric Clapton’s rock and roll favorite, Layla. 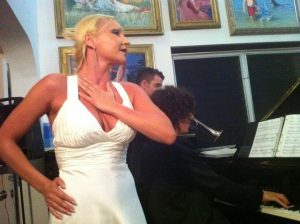 “There was no program, no tickets, no standing in line. I have 100 seats in my living room. After that, others sat out on the lawn where they could still hear the music quite well. A neighbor provided refreshments. We did pass the hat after the performances to help differ the musicians travel expenses. However, we gave them rooms here at the house for the week. Other’s on Water Island invited them over to dinner throughout the week. It was pretty incredible watching one of these talented musicians perform after just spending a few hours before chatting with them over dinner. Other people took them out for boat rides, or snorkelling, or for a hike. They all come from cold places so they really enjoyed being in the Virgin Islands in January,” says Randall.

A few years ago, Garguilo conceived of the ‘Getting to Carnegie Hall’ competition. He invited violinists one year, cellists another, from international conservatories to compete for a place on stage with him at this New York City showplace. The response of sold-out audiences determined winners. The prize? A trip to perform at the Water Island Music Festival.

“Last year, Julian played an original song with lyrics called the Breakfast Song. At the end, I told him that wasn’t classical, it was a Broadway show tune. I could just envision it, meals through the different stages of a relationship. I bugged him every week, just like he first bugged me to get a piano, to write a Broadway show. He did, and came up with eight songs. The vocalist students in this year’s ‘Getting to Carnegie Hall’ contest had to perform two of the songs. The winner sang all eight songs here on Water Island,” Randall says.